Looking Beyond the Stars in Night Photography

“Infinity and Beyond” –  Milky Way over Lake Superior Shoreline, MN

This image was created with a combination of eight high resolution images taken over fifteen minutes around midnight on a dark and clear night along the North Shore of Lake Superior. I planned the shot first using the PhotoPills APP and then when visiting the location, the prior year.

My last post dealt with an introduction to Night Photography. This one will deal more with my artistic approach and creative vision. I have always had an interest in space but never been a night person, so my photography was focused on daytime hours. Mostly around sunrise and set. Then, a few years ago a grand prize international competition image caught my attention. It was a picture of the Milky Way arch and while technically very strong I felt it was weak compositionally. The placement of the Milky Way in the picture seemed off, while the foreground was cluttered, distracting, as well as obviously artificially and unnaturally lit.

I did not feel it was the strongest image in the competition, it just was unique (at the time) because it included the whole Milky Way arch. But it did stir my interest and creative impulse. As I researched how to create nighttime images, I came across additional images that lacked strong compositional techniques. The photographers seemed to take the approach, focus on the sky & stars, and disregard the rest. Many earthly elements distracted the viewer, cluttered the image, and needed to be simplified or removed from the image entirely. Additionally, many images distorted the colors and where oversaturated. A growing trend with daytime photography as well. Just like an image of even the most dramatic sunrise or sunset will not work if the sky clashes with the rest of the image, night images need to have symmetry between sky and ground elements.

As I started to experiment with night sky photography, I took the approach to create well composed images that harmoniously blended sky and ground elements in the same way I would approach any landscape composition. My early attempts where focused on learning and fine tuning my techniques to produce technically sound images. My success rate was relatively low, but it did teach me a lot and strengthen my technical skills for future opportunities. I remember one night, camped on an island in Northern Wisconsin I got up around midnight and took several shots. I then retreated to my tent, downloaded, and reviewed my images, and then retook the shots. I repeated that cycle several times before the first hint of dawn light began. It didn’t produce any dramatic images but allowed me to fine tune my technique and capture some nice images the following nights. 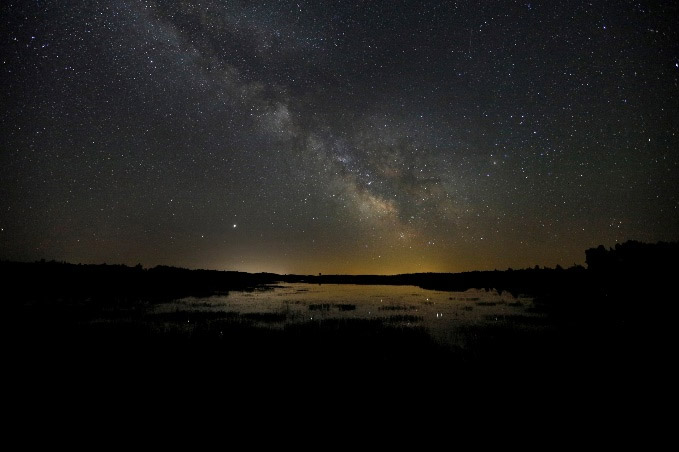 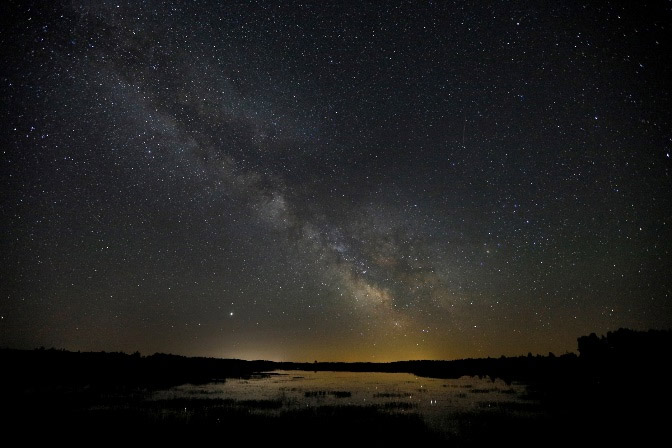 One of my early Milky Way attempts and successes. In the first image I tried to include more foreground to capture the maximum number of stars reflecting in the marsh water. A simple vertical re-composition eliminated most of the distracting dark foreground while including more of the dramatic night sky and positioning the center of the Milky Way in stronger position while still including the majority of the reflecting stars. 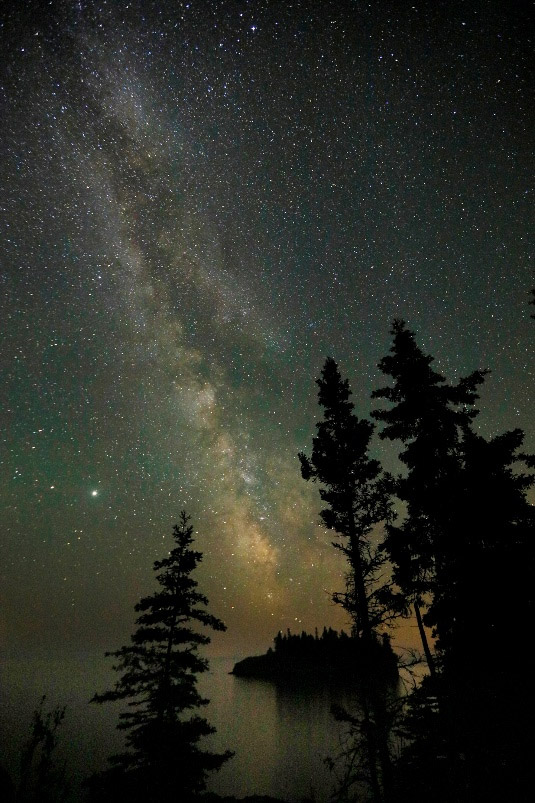 The exposure needed to include detail in the landscape underneath the night sky will usually require a different exposure than that of the night sky. To correct for that difference, you can take two separate exposures and then stitch the two together in post processing, use portable artificial lights to illuminate the landscape, or a combination of both. The position of the Milky Way moves both throughout the night and year. In spring it runs more horizontally, close to the horizon. By summer and into fall it moves to a more vertical positioning. Taking that into account, I changed my approach at that time. Looking for taller objects to include in image, taking more vertical compositions, and fewer panoramic shots. It was also a good time to use longer lenses to focus in on and capture images of the galactic core. This in the most dramatic and colorful part of the Milky Way. Being able to include the core will usually create a stronger image.

In the upcoming year I hope to find new locations and opportunities to capture the night landscape, using a variety of lighting both natural and artificial light to illuminate the landscape.